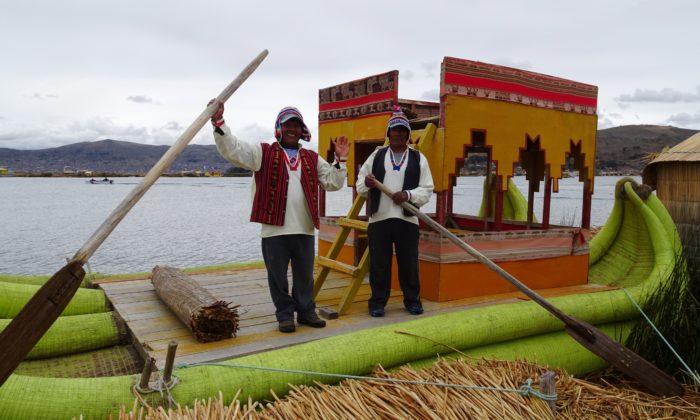 If you are planning on touring Peru, then check out this article by Jill Dobbe, where she journals her experiences on a Floating Reed Island with the Uros People of Peru.

The motorized rowboat sped onto the sapphire, blue water of the Bay of Puno, and I held tight to its side. Wilbur, the boat captain, raced past the tall grasses growing inside the narrow passageway and took us onto Lake Titicaca, the world’s highest lake. The wind whipped my hair into a frenzied mess, and as I pushed it out of my eyes, the scene in front of me opened onto an fantastic utopian community of islands made entirely of dried plants. Momentarily awestruck, I never imagined seeing so many small, habitable islands in one place. 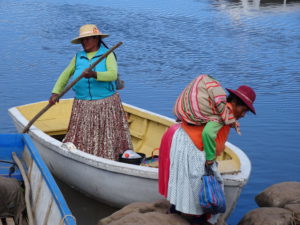 “Bienvenidos! Welcome!” A plump woman wearing a yellow, straw, sun hat and billowy, fluorescent pink skirt shouted at us as our boat floated toward the shore. Wilbur threw the thick rope to her, and she pulled us in. I stood up, a little wobbly from the teetering boat and grabbed tightly to her outstretched hand. Stepping hesitantly onto the dried, spongy plants, my feet sunk down an inch and I almost toppled over. Chuckling with surprise, it took me a bit to get used to tramping on top of the thick layers of dried reeds, which felt more like bounding onto a large, springy mattress, than treading on firm ground.

Families lived on approximately half of the forty-two self-made islands that were created from layers of buoyant totora reeds. The reeds grew in abundance along the shallow ends of the lake and were considered to be the life-blood of the Uros people. They lived in them, slept on them, and, because they were rich in calcium and iron, even ate them. Also, nearly everything else on the islands—huts, decks, boats, lookout towers—were constructed from the durable, greenish plants.

The islands became permanent homes for the tight-knit, indigenous Uros, ever since the Incas encroached upon their territory and drove them out.  With nowhere else to go, they moved onto the lake and built their own floating villages where their traditional culture and way of life remains the same, except for the addition of electricity powered by batteries and solar panels.

One of the highlights for me, of visiting other cultures, is finding local, handmade crafts, and the Uros didn’t disappoint. Every afternoon, the women, in their ancestral skirts and vests and long, dark braids with furry pom-poms attached to the ends (meaning they were ready for marriage), rolled out their blankets atop the reedy ground and laid out their intricately woven tapestries. With big smiles, they watched and waited, picking up one or two of their prized pieces and waving them at me.

“Buy from me!” they seemed to say as they put on their most hopeful, pleading faces. 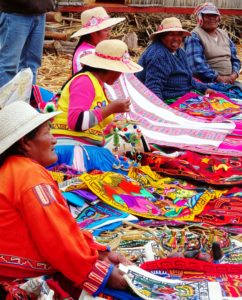 It didn’t take much to entice me into buying, even though each woman, and the occasional man, had the same, exact design, only in different colors. After spending more Peruvian soles than I originally intended, I nevertheless, walked away the proud owner of several cherished pieces.

The daily life of the Uros prevailed in peace and harmony. The women sold their unique, handwoven items, as a means to supplement their small incomes. They also cooked over open fires and cared for the children. The men took care of the building and repairing the island and fished and hunted birds for food. School-aged children traveled back and forth by boat to their island school, while younger children, with runny noses and rosy, chapped cheeks, from the high altitude and thin air, raced around the island chasing one another. Falling and hurting themselves, was never a major concern as they seemed to simply, bounce off the reeds.

I visited the floating reed islands during December 2017, and at that time of year, the mornings and evenings got very chilly; I was thankful that I brought along a wool sweater to wrap up in. For three nights I stayed in one of the cozy huts, with its walls, floor, and ceiling fashioned from sturdy totora reeds. The hut provided zero warmth but was somewhat cozy. A large rectangular window covered one entire wall and gave me a sweeping view of the wavy lake. The cheery, striped wall-hangings that adorned the walls added a much-needed spot of color to the neutral shade of the dried reeds. My minimalist lodging had only one lightbulb, and the electricity was turned on from 6:00 p.m. to 6:00 a.m.

The teeny-tiny bathroom was outfitted with a porcelain toilet that had no flushing device, and, emptied into a large, plastic bag. A sink with a faucet and knobs, but no running water, completed the space. Two comfy beds sat in opposite corners of the hut and were piled high with scratchy woolen blankets. The layers of blankets kept me warm at night, however, what really helped to combat the nightly, cold temperatures was the 32-ounce, cloth-wrapped, plastic bottle filled with boiling hot water, which was delivered each evening by one of the kindhearted island ladies.

Each night I placed that bottle between my legs and succumbed to its toasty warmth all night long. Those water bottles, the thick handmade quilts, and the sounds of slapping waves right outside my hut lulled me into a sound, dreamless sleep each night.

By mid-afternoon most days, the fierce sun burned brightly and the air heated up. It was the best time for me to lounge on one of the outdoor reed decks, look out onto shimmery Lake Titicaca, and contemplate the bucolic life of the Uros people.

The cap to my visit was a ride atop one of the two-story traditional reed boats. Two men in native clothing and wearing authentic reed hats rowed and steered the craft onto the lake, while two woven, puma heads perched on the helm and stared straight ahead.

Pumas represent courage to the island-dwellers, and the courage displayed by the Uros seemed to contribute significantly to everything they accomplished–the preservation of a self-sustaining lifestyle, the establishment of their own land, and a life lived as their ancestors once had.

After stepping aboard the tall craft, I climbed the ladder to the top deck, and we set off. Floating leisurely past the islands, I waved at the Uros men, women, and children who waved back, as they went about their quiet, simple lives.

My last glimpse of the enchanting Uros culture and their extraordinary, man-made reed islands left me in a state of awe.

The visit to the island was an unforgettable, off-the-beaten-path travel experience that adventurers continually long for, and still hope to find out in the world.

This article was written by Guest Contributor Jill Dobbe.