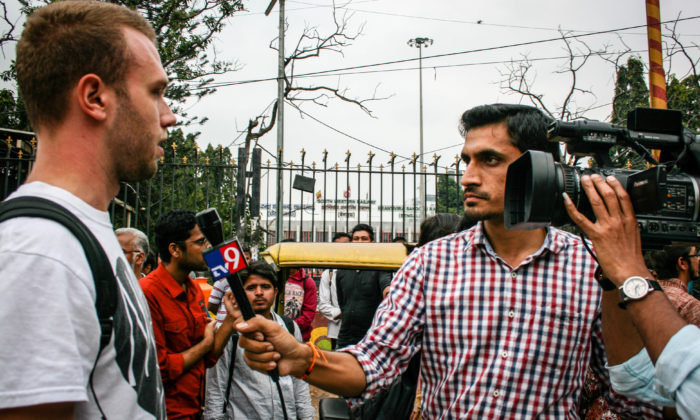 Asmo Esser, a law student from Finland, who came to India on a student exchange program shares his experiences about India. He visited several places in India like Bangalore, Agra, Delhi, Mumbai, Rishikesh, and Varanasi. Here are his thoughts about India.

When did you arrive in India?

I arrived in Bangalore, India on Sept 2017. I was told that it was one of the most westernized cities in India. When I arrived here, I didn’t see how anyone could make such a claim. I thought it was quite Indian.

But after I traveled around and saw other places like Mumbai and Delhi, I realized what it meant. I thought Bangalore was way cleaner, a lot better infrastructure, you don’t have that kind of poverty, or at least, it’s not in your face like in Mumbai or Delhi, and people in Bangalore seemed more laidback than in the North.

Bangalore also has all the western franchises and the metro which is pretty nice actually.

Although most places shut at 1 am, I think the party scene is quite wonderful, especially the micro-breweries. There are so many microbreweries in Bangalore, which sets it apart from other cities.

Bangalore has a really good beer culture. I see people start drinking from 2 p.m., rarely seen in other Indian cities.

The weather here is amazing. But, what would I like the most besides the weather?

It must be the bars. The nightlife.

You still get to places relatively quickly, especially if you have the metro.

I also think the air pollution here is a little lower than in Delhi and Mumbai.

The air is not great; I’m going to admit that. But much better in comparison to the other cities I’ve been to in India.

And what I like about Bangalore is that it’s so close to other tourist places like Goa, Mysore, and Kerala. It’s easy to go on weekend retreats to the coast if you’re here. I think that’s something that you appreciate when you’re here. You don’t have that in Delhi or elsewhere.

What has been your worst experience in India?

I’ve never really had a bad experience as such.

In Mumbai, I got chased down with a stick once by a beggar (funny). That, and maybe the children that were begging in Mumbai, was sad.

My friend Justin had a scooter accident in Goa, and he lost both of his front teeth. We had to go to a hospital somewhere in Goa at like six in the morning.

That was a bad experience, in a sense that I definitely wouldn’t want to do that again.

But otherwise, India has been great!

Tell us about your college experience in India

The college is located on a beautiful campus.

The campus itself is nice and serene by Indian standards.

The people that go here are just really smart. The entry requirements, in general, are hard. So I’ve been studying together with the smartest people ever.

Everyone is super engaged. The workload is just pretty crazy. I’ve had to take five courses at the same time, and every course has presentations, essays, and exams.

So it’s more work than in Europe.

The school administration here is not good at all. They didn’t provide me with any help regarding registration or just general information about the city. So that was a little bit unorganized. But extraordinary students here. Made great friends along the way.

In India what I thought was just really, really great was how friendly people are. The landscape can change quickly and vastly, but, the hospitality of the people stays the same wherever you go in India. That’s something that I appreciated.

Do you see yourself living in India for the rest of your life?

For the rest of my life? Well, No. I think I miss my home too much. But I can see myself coming back and working here.

I’m coming back here for the holidays, and if I ever get an opportunity to work here, I’m definitely going to take that and come back for a few weeks.

What are the major cultural differences you see between India and Europe?

First and foremost, it’s the organization of things. The structure.

You can’t rely on someone being on time.

Or something just working the way you imagined it to be.

But In another sense, it’s good because it teaches you to be flexible and adapt to changing situations and get a little bit more patient. I feel like in Europe; we’re always too quick, and too stressed out. People here just take it as it is and adapt to situations and have a little bit more of a relaxed attitude. A lot of things here are still very traditional. All these ancient traditions still being present in modern day life. Also, religion is a big influencer of things here.

For example, you have the standard gender separation on campus. Not among modern, westernized Indians as much.

You have cows walking on the streets. That’s a really big difference.

You see temples everywhere. People seem to have some sort of shrine in their homes. That’s quite different from Europe.

What other places did you travel in India?

I went to Hampi. I was there for a bit, then I went to Goa, and stayed there for one and a half weeks.

From Goa, I went to Mumbai and was there for a few days; then I went to Udaipur, and from Udaipur to Jaipur.

From there, I went to Rishikesh. I ended up staying in Rishikesh much longer than anywhere else.

From Rishikesh, I went down to Agra to see the Taj Mahal.

I thought Agra as a city was horrible. Probably the worst city I’ve been to in India. From there I went to Varanasi which was pretty intense, in terms of what you see there and how the city is.  From Varanasi, we went to Delhi. And eventually, from Delhi, we flew back down to Bangalore.

What did you like about each of these cities?

Mumbai was a bit overwhelming, to be honest. I didn’t have enough time to dive into the city but the nightlife in Mumbai was amazing.

Udaipur reminded me of an Italian city. It could have been somewhere in Tuscany. You have the big lake and mountains. Scenery wise – nice.

Rishikesh has a certain vibe to the city. I think there was a combination of Indians coming there for pilgrimage, and foreigners. It was just relaxing. It wasn’t as hot as the rest of the country at that point and had a very laid back vibe with beautiful scenery.

Agra, I didn’t like anything about it. Agra was really bad. Everyone tried to rip me off. It was an Ugly city. It was not a nice experience. I only stayed for one night, fortunately, and I was happy to leave.

And then, Varanasi was just intense in a lot of ways. I learned about Hinduism, beliefs and all this after death stuff. It was impressive to see where they cremated people. I got lost in Varanasi so many times.

Delhi was massively big. I stayed in Old Delhi. What I remembered about Delhi was the street food. It was awesome. Delhi was just big, and I didn’t have really enough time to get a whole picture of the city, just old Delhi.

How did you travel around India?

It was mostly by bus. From Udaipur to Jaipur I took the train. The trains are just so hard to book here as a foreigner, especially if you want to be flexible and not book everything two weeks ahead of time. In terms of comfort, the buses are really good.

How would you rate your overall experience in India?

It’s been quite a surreal experience. I’ve loved every bit of it. I would want to come back in the future.