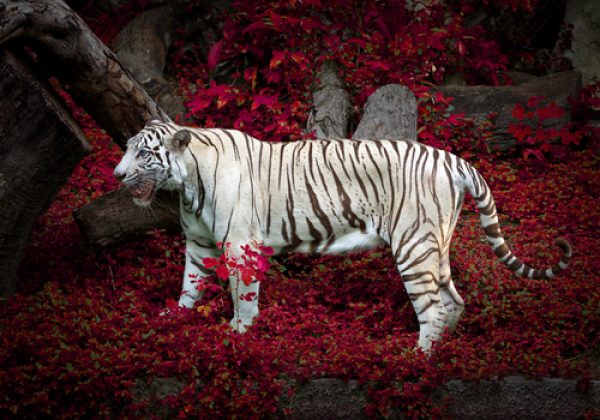 A jungle is always mystique and bone-chilling. There are many jungles in India that great places to visit. It is quite an experience to cut through the dense forest and catch a glimpse of the wild, to get a reek of their way of living. Pretty much like our survival strategies in the civilization, the wild too has its ‘survival of the fittest’ strategy at good play. What I truly hold dear is the creepy sound in the forest, dense and high woods barring the sunlight and the footloose at a river spur. Going back to nature that cuts you off from civilization will rejuvenate your soul. You will feel more connected to life, if not the concrete jungle.

Tiger Reserves in India ensure the safety of tigers alongside ensuring the safety of humans by taking them for a jungle safari in a cage like vehicle, a reverse of caged tigers in zoos. Such a measure is taken because wild is always more appealing in their wilderness.

I will discuss two tiger reserves in India that are worth a visit.

Ranthambore Tiger Reserve is located in Sawai Madhopur in Rajasthan, where reigns the king, the majestic Tiger. Atop the mountains, there is an enormous fort at the foothill of which rests the national sanctuary, one of the few Tiger Reserves in India. The place is a combine of mountains, green forest, and lakes. During ancient times, Ranthambhore had been the place of hunting for the former rulers and royals of Jaipur. In the year 1971, Ranthambhor was declared a Tiger Reserve which eventually gained the title of National Tiger Reserve by the later years. To go into the jungle, you need to ask for the forest department’s permission and comply with a handful of precautionary measures. The forest department allots a Jeep which takes you inside the jungle. To reach the main region, you will need to pass by Ranthambhor fort whose gigantic front gate overlooks the rocky roads to the forest. Taken the road, you are likely to reach a water body where there are Crocodiles to be seen.

Then there are the three lakes, Padam, Rajbhag, and Millar, among which Padam looks pristine being covered with lotuses. The migrating birds gather here during the winters whose sight is a treat to the eye. In a fleeting distance from Padam, there is Jogi Mahal which overlooks the Ranthambhor fort mothered by both Aravali and Vindhya mountains. The Ranthambhor fort, which is built of red stones, stands witness to the rhapsodic Rajput architecture. Then you may waft towards the Rajbhag Lake. The thorny bushes in the rocky side roads set an adventurous atmosphere. After a concise walk along the road, you will bump into Rajbhag Lake, and if you’re lucky, you will have an eyeful of Leopards, Sambar Deers, Bears, Jackal, and countless migrating birds. Enthralling to the bits, the Jungle safari spans 3 hours at the most.

This famous National Tiger reserve in Karnataka spans around 247 square miles. In Kannada, Nagar means snake, and hole means fountain. True to the name, the river Kabini courses in the jungle tearing it apart in full vigor. In the vicinity, there are grasslands and water bodies everywhere, which gives it a spooky disguise. It is known from the locals that the former kings of Karnataka came here to hunt. This is the free zone of Elephants, Panthers, Sambar Deers, Jackals, Bisons, and Tigers. Countless species of migratory birds also grace the place. It is a short journey from Hunsur to Nagarhole, and ideally, you should opt for a road journey. Elephant safari is also available here. A lot of animals come off the forest during the summers. The screeching sound of the Hyenas and Jackals thicken the thrill. In a very short distance from Merkel, there lay the Abbey fountain and in the journey, you pass by Irpu River where you can go about a boating spree. Nagarhole could be reached easily from Mysore in a car by the road. Best time to visit is during March and April.

Another tiger reserve in India to check out is Sunderbans in West Bengal.